ving as a spokesperson for “colored people” in her adopted hometown of Tarrytown, NY, to helping to found a statewide organization for black women, my great grandmother (Momma Addie) was an “activist” in every sense of the word.

As these newspaper clippings from the early 1900s show, Momma Addie’s (Mrs. Clarence Jackson) leadership on the local level included advocating for a community center for Tarrytown’s “colored” residents and chairing the town’s “Colored Republican 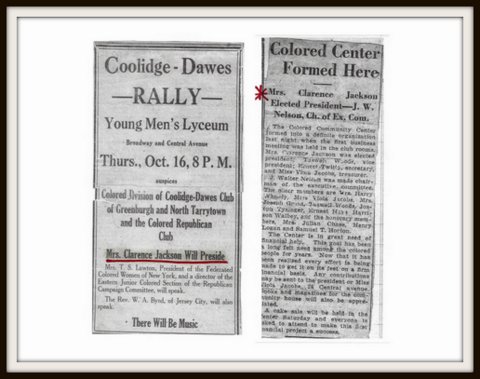 The town’s elected leaders would often turn to Momma Addie for her advice on community and racial matters. According to an early 1900s issue of the Tarrytown Daily News, a member of the committee set up to seek solutions to problems associated with the town’s rapid growth, said he “wished Mrs. Clarence Jackson, a member of the colored race and respected by both races, would give her views on the subject.”

Momma Addie used the opportunity to advocate for the needs of Tarrytown’s black community. “There 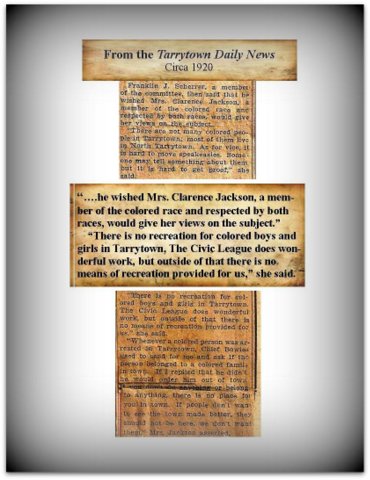 is no recreation for colored boys and girls in Tarrytown. The Civic League does wonderful work, but outside of that there is no means of recreation for us,” she told the committee.

In 1914, Momma Addie would be elected the first president of Tarrytown’s fledgling Colored Community Center. The local newspaper called the establishment of the center “a long felt need among colored people for years.”

It should come as no surprise that Momma Addie and her contemporaries were Republicans. During the early 1900s, most blacks supported what was widely known as “the party of Lincoln.” As a Republican Party activist, Momma Addie helped organize forums to discuss the presidential candidacies of Herbert Hoover and Calvin Coolidge.

“The 30th president, Republican Calvin Coolidge, was a major supporter of Howard University and an overlooked figure in advancing the cause of racial equality in the United States,” Schmoke wrote.

Here is a segment of Coolidge’s commencement speech: “The nation has need of all that can be contributed to it through the best efforts of all its citizens. The colored people have repeatedly proved their devotion to the high ideals of our country. They gave their services in the war with the same patriotism and readiness that other citizens did …. The propaganda of prejudice and hatred which sought to keep the colored men from supporting the national cause completely failed.”